…Markets to open for three days weekly in alternation

The five-week lockdown imposed by the Federal Government on Lagos State and two other states to combat Coronavirus Disease (COVID-19) will be eased on Monday (tomorrow), but Lagos State Government has asked all its civil servants not to resume for work immediately.

Governor Babajide Sanwo-Olu, in a briefing on Sunday at the State House in Marina, said the delayed resumption of the State’s workforce is a deliberate attempt to prevent a development that may lead to a crowding of people on the roads and public places.

Only emergency workers and those on essential duties will be allowed to work on Monday, the Governor said.

Sanwo-Olu said the State’s civil service offices would be re-opened for business on Tuesday, but only officers from Grade Level 15 and above would be required to be in the office. If any junior-ranked officer must be at work, the Governor said the Accounting Officer of the Ministry must give clearance to the officer.

Sanwo-Olu said: “In amending the work guidelines earlier issued, which stopped members of the public service from Grade Level 1 to 12 from going to work; we have had to review this position and we are extending the directive to all civil servants, regardless of level. All civil servants must stay away from work on Monday.

“On Tuesday, only officers from Grade Level 15 and above have express permission to come to work. All other essential officers that may need to be at work will be informed by the Accounting Officer of each Ministry as may be required.

“From Monday on, there will be curfew from 8pm to 6am and all movement within these hours are prohibited, except for people on essential services, which are agro-products, petroleum products, relief materials and food supplies.

As part of the moves by the State Government to prevent crowding in public places, the Governor directed all markets to open for three days weekly in alternation. Food markets across the State are to be opened only on Tuesdays, Thursdays and Saturdays from 9am to 3pm.

Non-food markets, Sanwo-Olu directed, shall only open on Mondays, Wednesdays and Fridays within the stipulated hours. He said all traders must put on face mask and provide hand sanitizers in their markets.

It is compulsory for any resident that must be in public places to face mask, the Governor said. 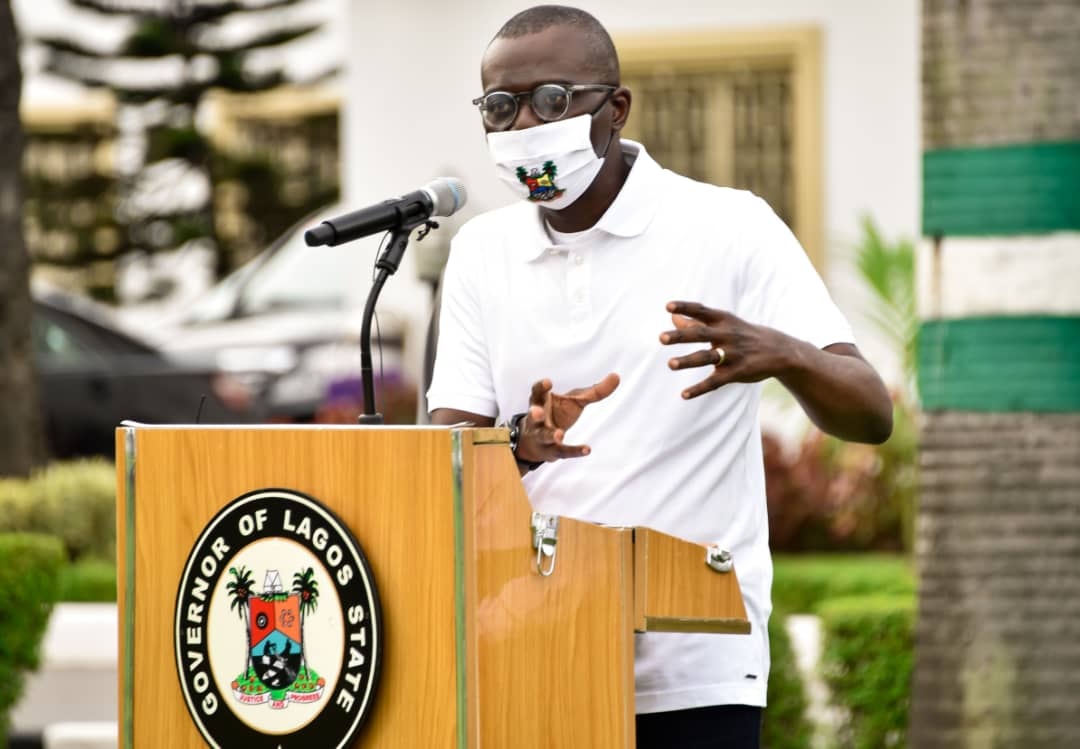 Also, banks and other private firms must open businesses with 60 per cent of staff strength, while also operating within the hours of 9am and 3pm. The Governor enjoined the privately-owned companies and manufacturing firms to arrange for the transportation of their essential staff that would be at work.

Gov. Sanwo-Olu, however, extended the operating hours for eateries and restaurants from 9am to 7pm, due to Ramadan fasting. But the Governor said restaurants and eateries must not allow their customers to eat-in. Food must not be served, only take-away packs and delivery, Sanwo-Olu directed.

All regulations initiated by the State Government must be strictly adhered to by public and private companies and members of the public, the Governor warned.

Earlier on Sunday, Gov. Sanwo-Olu held a virtual meeting with 40 traditional rulers and 57 local council chairmen across the State, discussing the State Government’s guidelines on easing the lockdown. The Governor urged monarchs and the council chairmen to disseminate all advocacy messages and guidelines to residents in their domains, stressing that the grassroots must be adequately informed on regulations initiated to ease the lockdown.

“Today, I had a useful discussion with 40 paramount traditional rulers in the State and 57 LGA chairmen. I am satisfied with suggestions coming out of these meetings. It is really about collaborative efforts and using these leaders as champions to disseminate all information and advocacy to the grassroots,” the Governor said.

The Governor allayed the fear of residents on movement, urging them to keep to the hygiene tips. He said the State had opened a dedicated isolation centre for health and emergency workers infected in the line of duty.

Sanwo-Olu said the State will be embarking on aggressive testing in community, noting that the Government had collected 3,000 samples that were yet to be tested due to global shortage of reagent used for molecular testing.

He said: “We have 3,000 samples collected but we have not been able to carry the test because of global shortage of reagent for molecular testing. We are hoping that some of the reagents will be supplied tomorrow and Tuesday.

“We made order for more reagents because of cases we have seen and it would not be out of place to see positive cases in the range of 20 per cent out of the 3,000 samples collected. We are improving the capacity of our isolation facilities in preparation to take care of more patients.”

Starting from Tuesday, the Governor directed the release of all vehicles seized for flouting the lockdown to their owners free of charge. The vehicles in this category include those seized not later than April 14.

Sanwo-Olu said all decisions taken by the State Government were adopted in the belief to protect all residents from the ravaging pandemic.

“We will continue to do our very best and maintain high level of transparency in the disbursement of resources donated towards the fight against COVID-19,” the Governor said.